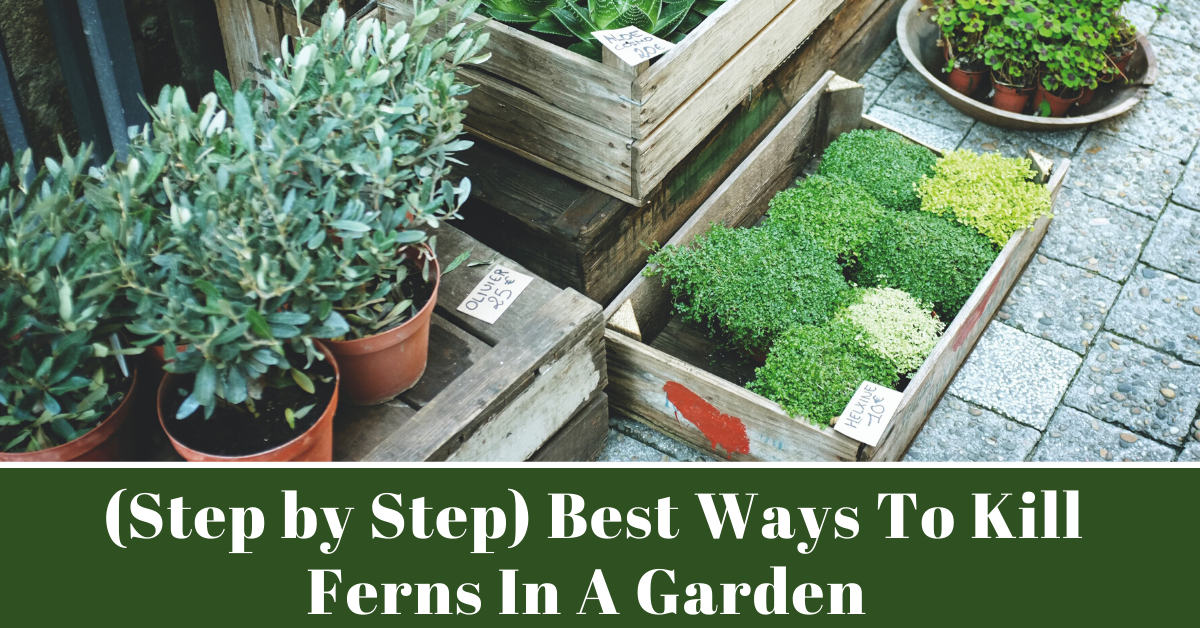 Gardeners often find themselves at odds with ferns. Ferns can present a problem for gardeners trying to create order and shape. While many people find ferns pretty and delicate, others want their gardens to look tidy.

Ferns can be difficult to kill in a garden because they have waxy leaves to prevent water loss, and they tend to love shady locations. This article will list some of the best ways to kill ferns in a garden, so you don’t have to deal with their ongoing invasion.

Ferns are a type of plant that belongs to the family Pteridophyta. This family contains around 10,000 different species of plants. Ferns can be found worldwide, in both tropical and temperate climates.

Ferns are identified by their fronds, which are the plant’s leaves. The fronds can be simple or compound, meaning that they are made up of smaller leaflets, or leaflets can be singular and unbranched.

Most ferns also grow spores on the underside of their fronds, used for reproduction. The leaves vary in size depending on the species, but they tend to be relatively large compared to other plants.

How do Ferns Reproduce?

Ferns reproduce through spores, which are tiny reproductive cells. The spores are produced on the undersides of the fern’s fronds. When the spores are mature, they will break away from the frond and travel through the air to new locations. The spores will germinate and grow into new fern plants if the conditions are right.

In addition to producing spores on fronds, ferns also produce new plants from underground stems called rhizomes. Ferns that reproduce through rhizomes are known as “clumpers,” They can quickly spread if not kept in check. This reproduction strategy is the main reason why ferns can be difficult to kill in a garden.

Ten best ways to kill ferns in a garden:

One of the most effective and modern ways to kill ferns is through chemical killers like glyphosate or glufosinate. Both products will kill existing ferns and help prevent new ones from growing. This method may take a few weeks, but it is one of the most effective and least environmentally intrusive ways of killing ferns. These chemicals can be bought at your local home improvement store.

Another organic way to kill ferns is by using weed killers like 2,4-D on the foliage. This method will take several weeks and repeated applications before dying, but it will probably be less costly than chemical treatments, and it is not as individually targeted.

A sprayer will allow you to cover the ferns in a garden with poison, so they die quickly, but it can also damage other plants around them if you aren’t careful. The trick to this method is covering the fern without oversaturating the surrounding plants.

One of the most natural ways to kill ferns is by using mulch. Mulch will smother ferns over time, and they won’t be able to photosynthesize, so they will eventually die. This can be a slow process, but it is effective and doesn’t damage the surrounding plants.

Like the one in the video below, Zappers allow you to kill ferns and other small plants without chemicals or mulching. This device works by killing the plant with a small electrical surge. This method is effective and doesn’t damage other plants.

Pruning can be an effective way of killing ferns, but it is a labor-intensive process. You will need to cut the fern off at the base and then dispose of the fern. This method is effective, but it will take a long time to kill all of the ferns in your garden.

In some cases, you can physically remove the fern from the ground with a shovel or by hand. If you try this method, make sure that you dispose of the plant immediately because it can start to grow again if the rhizomes are left in the ground.

Soil solarization is a process where you cover the soil with a clear plastic sheet and let the sun bake the ferns to death. This method is effective, but it takes a long time, and it can be difficult to find the right time to do it when you won’t do more harm than good.

A popular way to kill ferns in gardens is by covering the current ferns with another plant or mulch, so they die out before producing new ones. This works well, but it can take a long time.

Covering a garden with tarps or black plastic is the easiest way to kill ferns. This method will smother and kill new fern growth and those that are currently growing. It is difficult to find stores that sell large enough tarps for this job, so you may have to make your own.

Are ferns bad for the garden?

Ferns don’t pose any problems for a garden, but they do require less sunlight than other plants. To prevent fern growth, you can use mulch or cover the ground with another plant such as perennial ryegrass.

How do you keep ferns from spreading?

One of the best ways to keep ferns from spreading is by keeping them in check. If you remove the rhizomes, they won’t spread, and you can also use a weed killer or zapper to kill them.

How do you dig up a fern?

Digging up a fern can be difficult because they have strong roots and rhizomes which help them survive. It is easier to cut the entire plant off at the base and then dispose of it so that it won’t grow back.

There are many best ways to kill ferns in a garden, and the best way for you will depend on your situation. If you are looking for an organic or natural way to get rid of them, mulching or using a weed killer are good options.

If you are looking for a more immediate solution, then zapping or spraying with herbicide may be a better choice. No matter what method you choose, make sure to cover the ferns completely so they can’t escape.

Gardening is a rewarding yet challenging pastime that requires the right tools. There are many different tools used for gardening. Whether it’s about choosing between a shovel or a rake, understanding what each does and how to use them is imperative when engaging in gardening. This article will provide knowledge on essential tools used for…

Clay soil is dense soil with a high percentage of clay particles. It can be difficult to work with because it is sticky and can form clumps. However, in this article, you’ll learn what is clay soil and how to improve it. In the garden, clay soil is a great problem for many people. It…